I've been out of the bike commuting game for two and a half years now, so why do I keep writing this blog? Because I still think of myself as a bike commuter, despite everything. Why else would I have just spent $150 to get my geriatric bike up to snuff yet again? At 8 years and 28,000 miles my old Specialized Crossroads still has some game left. And now it has new pedals and handlebar grips as well!

Even if my commuting situation doesn't change, I've still got some ideas for the old girl. My son-in-law has turned out to be a bike-riding FIEND and we're making very preliminary plans for a cross-country ride in a couple years, once he's established as a high-school teacher with an enviable summer schedule. Until then I still have the option of biking to Edmonds for a cozy train ride to work. Nothing stays the same forever - I'll be back in the saddle one way or another before too long.

In the meantime I read all the bike blogs, vote for bike-friendly politicians, and keep my Cascade Bicycle Club membership up to date. I'm idling, not petering out. Just wait, you'll see.
Posted by Dan Taflin at 10:57 PM 1 comment:

OK, I've been pouting for more than a year now over the fact that my company moved from an awesome location (Fremont, right next to the Burke-Gilman trail) to a horrible location (International District), bike-commuting-wise. (Not just bike-commuting-wise, either; Fremont is awesome, the International District is loud, dirty, crowded, and ugly. Not that I'm still pouting or anything...). My company used to field several gung-ho teams during Group Health's Bike Commute Challenge, but since the move we've been...not so gung-ho. But a new captain has arisen to lead the charge, and I've been sucked in.

The kicker was having it pointed out that biking to a bus stop or train terminal COUNTS. I can bike to the Edmonds train terminal on a reasonable route (I've done it many times during good weather), and my company provides an Orca card that covers everything from there, so I've really got no good excuse. So no more whining, I'm in! Rain or shine!

So that means I have to get my bike back into all-weather shape. I used to have an all-weather trunk attached to my rack, into which I could throw a backpack and a change of clothes. But last time I broke my rack, which happened with depressing regularity when I was a faithful bike commuter, I decided not to attach the trunk to the new rack. I had replaced the rack in kind, and I had come to believe that the reason the old one broke was because the way I had the trunk hanging off the back edge had put too much stress on the rails (see photo of the break below).

But if I'm going to commit to the 7-mile ride into Edmonds I need to be able to depend on having something dry to change into, so it's time to reattach it, mechanical deficiencies or no.

Last weekend I did just that, turning it around 180° so I could snug it up closer to the seat and not have so much of it hanging off the rear. The wraparound reflector now faces the wrong way, but maybe this configuration will be a little easier on the rack. Lube the chain, pump up the tires, and I'm ready to roll. Watch out, Seattle, the trunk guy is back!

Bicycling for the non-political

I am a faithful, if not very active, member of the Cascade Bicycle Club and an enthusiastic reader of Tom Fucoloro's excellent Seattle Bike Blog, both of which keep me informed on the state of bike-related legal developments, funding, news, and controversies. I cheer when bicycle activists succeed in forcing a rethinking of access to the Northgate Light Rail Station; I howl in frustration when another roadblock is thrown in front of the long-delayed Burke-Gilman Missing Link. I've even spoken at a public hearing when my own city of Lake Forest Park tried to impose draconian limitations on the portion of the Burke-Gilman trail running through it.

But at heart I'm not a political being.

I just want a nice place to ride my bike in safety. I don't want to fight about it.

And that, by and large, is what I do. When my commute was bicycle-friendly, I biked. Now that it isn't, I don't. It would be really great if there were a decent route physically separated from auto traffic between Lake Union and the International District, because then I would bike again, but there isn't. I can't bring myself to expend much effort in trying to change things, so I just accept reality and adjust.

Does this make me an irresponsible biker?

Actually, I think it makes me a typical biker. I have a full life; if I were to devote the time it would take to make a difference in our local political arena to support biking improvements, I would have to stop doing some other equally valuable activity. Modesty prevents me from listing the things I do devote time and energy to, but suffice it to say that my conscience is clear on this point.

As in most socially beneficial activities, it is the few that do most of the work on behalf of the many. So let me take a moment to acknowledge the hard-working folks who are making a real difference in Seattle's bicycling community.

For every one of you making yourself heard at public hearings and badgering our local politicians, there are hundreds or even thousands of us who benefit. And despite the occasional setback, we're on quite a winning streak right now in Seattle. It seems every time I venture into a neighborhood I haven't been in for a while I notice a new bicycle-related improvement. More trails and bicycle lanes in Mountlake Terrace, sharrows in Maple Leaf. It's amazing, really, how it has taken off in the last few years. It's no fluke that Seattle consistently ranks near the top in lists of bicycle-friendly cities, and we're still improving.

Hopefully someday we'll even have a decent route through downtown. It may come too late for me, but I will still rejoice when it does come. I, and thousands of other non-political riders who you won't see at any city council meeting or in the hallowed halls of Olympia. 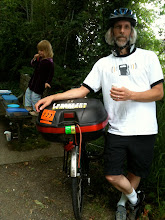